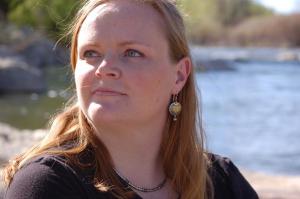 Despair to hope is a journey that one local woman has traveled successfully. Thirty two year old, Shelia Sallie’s struggles started as a young child. Depression and anxiety plagued her, but she didn’t know what it was or have anyone to help her cope.

Her early school memories are permeated with loneliness, fear and worry that something bad would happen to her. She would fake being sick so she wouldn’t have to go to school for days or even weeks at a time. Shelia remembers wrapping herself in her imagination to escape her fears and try to cope with her life. Her school years were spent as a loner and her fears kept her from even trying to make friends. She didn’t understand what was wrong with her and felt certain no one else would either.

“My every day life was dreary, with no happiness,” said Shelia. “I just drifted along trying to survive any way that I could.”

At the age of seven, Shelia’s school had a class about inappropriate touching and molestation. As a result of the class she realized that her Dad had been sexually abusing her since she was about five years old. She told her Mom what was happening but, when confronted, her father denied the accusations and accused Shelia of lying about him. The abuse would continue for several years until Shelia threatened to call the police about the sexual abuse if it didn’t stop. The anger, at her father for the abuse and her mother for not believing the abuse was happening, was crippling for Shelia.

The depression and anxiety continued for Shelia throughout her teen and young adult years. She was unable to hold down a job and continued to miss school. She reached out to her pastor’s wife at age 19 and was able to at least talk about some of her struggles. At 21, she briefly saw a therapist and tried some medication but her efforts at recovery were half-hearted and sporadic. Shelia continued to struggle with her illness until she ended up admitting herself to a psychiatric hospital when she was 25.

The hospital admission was a turning point in Shelia’s relationship with her Mom. “She finally realized that I was sick and needed help,” said Shelia. “She and I talked all the time after that point about whatever I was going through,” said Shelia. “My mom would research my diagnosis and ask me to bring her information from my therapist so she could understand what I was going through.”

While her daughter was struggling with her mental illness, Shelia’s mother was battling cancer. The cancer was spreading and she underwent chemo on a monthly basis to try and keep it under control. The cancer would eventually win, but before she died, Shelia’s mother made her vow to remain committed and consistent with her mental health treatment. “Probably the moment that really changed my direction was the promise to my mom,” said Shelia. “If not for that promise I honestly don’t know if I would be here today.”

Shelia initially started seeing a psychiatrist from out of town for medication and a local therapist for counseling. She started to look for a psychiatrist in the Salida area and was directed to Solvista Health where she enrolled for services. “I found the therapy at Solvista the most effective of any I had ever gotten,” said Shelia.

“Two factors have helped in my success. First, I committed to my therapy and didn’t stop taking my medication. Second, is having the psychiatrist and therapist in the same clinic to discuss my progress and any changes that need to be made,” she said. “I have a team looking out for my well being and they are committed to helping me.”

Besides therapy and medication, group therapy has been another part of Shelia’s recovery. “The Dialectical Behavior Therapy has been majorly helpful in learning new skills to handle everyday life issues,” said Shelia. “Group therapy is a great resource in helping you realize that you aren’t the only one going through these issues. Not feeling alone is huge.”

Shelia wants other people who are dealing with mental illness to know that professional help is necessary for recovery. “Face the fear and go for help,” said Shelia. “It takes commitment, hard work and the changes don’t happen overnight, but if you are in it for the long haul, you can live successful with a mental illness.”

“When I started receiving services at Solvista I couldn’t have even imagined my life being even a third as good as it is now,” said Shelia. “My illness no longer controls my life. I now have tools and skills to make it through hard times and not let them put my life on hold,” she said. “I am no longer a victim, I am a survivor and the future is open for me to live my life fully.”

Back To Success Stories